7TV 2nd Edition is available as a free download from Crooked Dice or as a boxed set of rules, cards and markers.  It is set in the late 1960s but includes details for just about any period covering much the same ground as Pulp Alley.  7TV involves a little less detail than Pulp Alley so will require a few more figures.  A typical Pulp Alley league might be 4 to 6 models.  The 7TV starter sets are of 8 models rated as 30 points with a 50 point game suggested as a medium size.  While comparing both systems consider what you get for your nothing in each case.  The Pulp Alley demo set has all the basic cards and most rules but only 2 leagues.  Additional leagues can be found around the Internet and the missing rules can be easily worked out.  7TV includes all the rules and cards including vehicles and squad weapons, you need another book for that in Pulp Alley.  Various 7TV paid expansions do add more model types and rules.  There are also some free expansion 7TV PDFs if you poke around the Crooked Dice download engine (Gumroad), at the time of writing Scooby Doo, Teenage Mutant Hero Turtles and Star Wars cards.

It is difficult to play either game with just the computer files.  Printing the rules and cards using a cheap black and white laser printer is a minimum.  The Pulp Alley style is largely black and white and all printed acceptably.  The 7TV basic rules are clearly laid out for printing but the cards use spot colour making some parts,including the essential defence rating hard to see in monochrome.  A case for a colour printer (shudder), inking in the dark bits or making your own unit summaries.

The core of the game system are plot points, a name that has a completely different meaning here than in Pulp Alley.  In 7TV a plot point is an activation point.  Players get 2 per heroic star, 1 per co-star and 1 per 2 extras.  The unit types relate to their cost and abilities.  It costs 1 plot point to activate 1 model.  An activation allows 2 actions but in general only 1 can involve a combat action.  2 actions can be used for moving, other actions include using special abilities and solving clues.  Unless a force is made up entirely of heroic stars and co stars there will not be enough points to activate every unit independently.  Luckily some models are leaders and can activate other close by models for free.  Plot points are also spent to activate the more useful special actions (such as invisibility) and to add to combat.  Shooting and hand to hand involves the defender rolling a dice and adding to their defence value.  The attacker then rolls a dice and adds that to a combat value, winning if the defender’s score is equalled or beaten.  The twist is that for each plot point spent an additional die is rolled.  The final score is the base value plus the value of the highest dice rolled plus an additional 1 for each other dice than the 1st which scored 4 or more.  The defender will be allocating additional dice before he knows what the attacker will roll and the attacker knows the defender’s final score before deciding to commit additional dice to the combat.

Cards are used to mark the game progress.  There are 3 decks each of increasing severity but none strong enough to throw off the game.  The decks are of 15 cards each but the number used depends on the table size.  A 4′ by 4′ game uses 6 of each card.  Each player turn a card is turned over making a potential 9 double-turn game (18 cards).  Sometimes more cards will be used in a turn so this would be the maximum game length.  Possibly the oddest event is one that causes a piece of terrain to be moved or removed.  It might be sensible to mark terrain as moveable or not before the game for this purpose.  A car might be driven away, a pile of boxes collapse but a brick outhouse is unlikely to be going anywhere.  There are also gadget cards which are allocated at the beginning of the game.  The basic method is to draw 2 per heroic star or co star, examine the cards and keep half to use in the game, spending an action to do so.  A tweak might be to remove gadget cards that cannot possibly be used before the draw.  For example some affect machines or robots none of which might be present.

For a first attempt I chose figures that were close to hand facing off the villainous cultists against The Doctor, a scientist side kick, some Rozzers and a police car.  Although both sides had 30 points the police were clearly outclassed.  In retrospect some intellectual types and police armed with wooden sticks would be unlikely to do well against a bunch of rifle armed cultist nutters.  The police have the interesting ability to arrest characters.  they did eventually beat down the cultist stone golem and get it into the van but by then were all dropping to cultist rifle fire.  The police strength was further reduced by having to spend points to buy the police vehicle and setting someone aside to drive it.  The Doctor and scientist might have been good at sorting out robots and machinery but were not up to a straight fight.  Basic hand weapons inflict 0 damage but can stun the enemy, 2 stuns make a kill but you only get 1 attack each turn.  When stunned the opponent can spend a plot point to recover making any kind of fisticuffs long winded unless you can pile on at an advantage of numbers.  All this makes sense with the lesson being the forces selected need to reflect the opposition and the task involved, just picking 2 equal points teams and having it away may not work out.

I had another go in a 35 point game but kept to the unarmed police as the figures were out of the box and they do not get as much use on the table as they should.

Here is the set up representing a railway shunting yard.  The objective markers indicate the railway carriages that need to be searched.  There is no need to climb on top of them.

Here are the Rozzers and their police van (I have had that a very long time).  The star (in front) has a pistol, everyone else has truncheons.  The girl is the co-star.  One policeman is the sergeant and can activate nearby flat foots at 1/2 a token per figure.  The red tokens are their starting plot points.

The bad guys, a criminal mastermind, mad scientist, head thug and regular thugs.  Everyone but the scientist has a pistol.

The Rozzers set up close to 2 objectives.  All the police standing around the van are actually riding in it.

The bad guys begin close to 2 (out of 3) objectives. 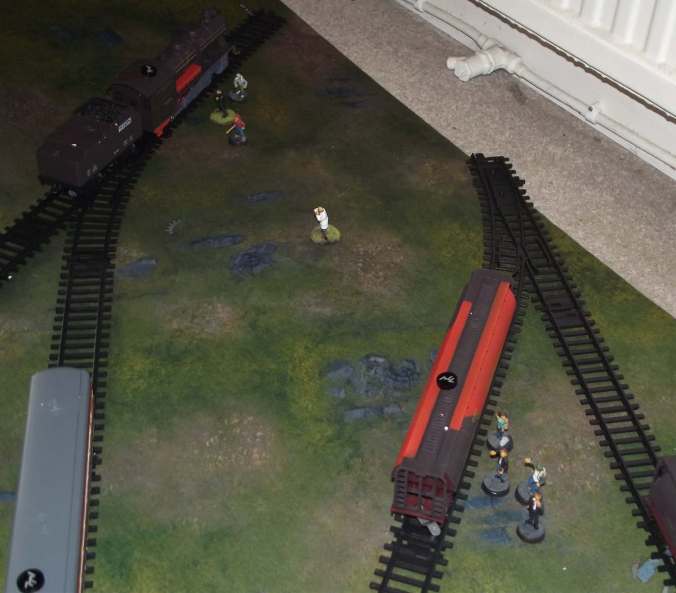 The police drive up, get out of the van and approach 1 objective.  The girl secures another.

The bad guys move up, secure 2 objectives and approach the 3rd.  Up to this point much use has been made of the cover provided by the rolling stock.

Both sides inch around the passenger carriage.

In a key game move a turn card allows 2 figures to swap places.  The mad scientist and girl swap exposing the young lady to charging from the thug gang.

The police come round, too late to save their co-star but with the hope of securing the objective she was holding. 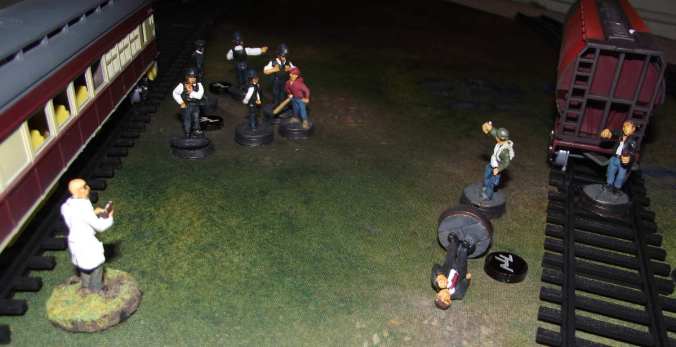 Truncheons are not a match for pistols and things look bad for the forces of law and order (note there are less of them now).

At the other side of the field the criminal mastermind and lead detective exchange pistol shots.

The mad scientist throws a nerve gas canister and weakens most of the police.  There was a rules error here as the canister should have been centred on the scientist rather than thrown (he is immune to the gas).

A game card allows the scientist to retrieve the gas canister which would otherwise have been a one-use gadget.  Having read the rules he now walks up to the weakened police and pulls the plug.  Figures that suffer the same effect twice lose a life and these Bobbies have only 1 life to give.

With over half their models lost the police fail their nerve test and the the show is over, halfway through act 2 (out of a possible 3).   Man of the match must be the mad scientist. He never engaged in any combat but drew the girl into the open and gassed the police not once but twice.

In any pulp type game the key to success is a believable scenario where there is a reason to do something other than run around and shoot things.  Both Pulp Alley and 7TV give their models statistics other than fight and run and the scenario should make use of these.  Statistic tests are built into the Pulp Alley game cards.  The 7TV ‘non-martial’ statistics are tested less often in the basic scenarios where the models run around and pick up victory locations by moving onto them.  The following game is based loosely on the scenario in the Scooby Doo 7TV download.

We have been tipped off by our contacts in the criminal underworld that the missing teenager is being held against her will by the notorious evil cult.  We have been observing their movements (the hooded robes are a subtle clue) and are sure that the hostage is being held at this location.  We cannot be exactly sure where she is but have identified the 6 most probable places.  We need to get in there and effect a rescue before the cult is able to react.

There are 6 objective tokens.  The cult do not receive any benefit from controlling them.  At the beginning of every cultist turn after their first they receive an additional ** if the forces of law and order have not gained a new objective in their previous turn.  When the opposition do gain an objective roll 1D6.  If the total is <= to the number of objectives previously secured then the hostage has been found.  Replace that objective with a bystander model representing the hostage.  The hostage is assumed to be restrained so a test based on FIGHT or MIND must be passed to free the hostage.  Extra dice may be spent on this task which requires a dedicated action.  When the hostage model is freed she can be activated for free by any adjacent model (cultist or law enforcement) if no model from the opposing faction is not also adjacent to the hostage.  No model from either side may use an attack with a range >0 that will pass at any point in its path within 1″ of the hostage base.

Victory is based on the standard victory conditions with the addition of:

To summarise the hostage must be found, freed and rescued. The cultists are able to grab the hostage back.  Neither side wants to risk injuring the hostage.  That would look bad for the rescuers and the cultists have other plans for her.