I dug my Russians out and headed to Chapeltown near Sheffield for Operation Chillstorm at Chillcon 2017.  Chapeltown is relatively near to Blackshaw Head, only £15 return on the train but taking 2 1/2 hours due to the train stopping at almost every station in the 2 counties.

I did consider running a Lend Lease Kursk list relying on a Soviet Lee and White armoured car with 2 MMGs and 1 HMGs.  This is a serious infantry shredding combination but at a cost of roughly 330 points.  The White is also prevented from shooting all 3 of its guns at the same target due to their arcs of fire.  Instead I fell back on a list similar to that I trotted over to Leeds Night Owls.  I dropped the tank hunters as they could never go fast enough to catch any tanks.  I put up a flamethrower although on retrospect these guys are a bullet magnet.  I upped my sniper to veteran.  Sniper duels are quite frequent and in general a veteran sniper will take out any opposing regular sniper.  I also upped squads to full strength where possible.  Full strength allows a re-roll on order tests.  Especially useful when coming in from reserve.   Here is my Chillcon list for the curious.

There were only 6 of us playing and almost everyone was a Soviet.  Oddly the v1 flavour of choice was veteran commando/paras/Gurkhas with lots of SMGs.  Also strange not to come across a German list with the world’s supply of panzerfausts and a panzer just big enough to cause tank fear.  Eventually I came half way up the field at 3rd and pulled off best painted so a good day out.  There seemed to be a strong trade showing but I managed to avoid any excessive purchasing.

On with the games, first off I faced a Japanese force in the Sectors scenario.

The board is divided into 4 quarters with both forces in opposing quadrants.  Points are gained for putting units in the empty quadrants and bonus points for being in the enemy set up quadrant.  Having bought scouts I had the advantage of forward deploy to get that unit in one empty quadrant at set up.  I also rolled well on the pre-game bombardment.  This can only kill on a 6 and will only damage 1 model.  The Japanese player had deployed a jeep with a flamethrower team in it on board.  This took a 6, destroying the jeep.  The linked D6 hits on the crew took out the flamethrower team as well.  There is a lesson in deployment here children.

Our boys did well with a clear win and impressive kill ratio, note the lack of Nips in the end game picture above.  The Japanese infantry did a lot of Banzai runs, stripping a pin as they moved towards me.  I had enough firepower to destroy the units (a quad AAA never does any harm) before they got close while also moving in on the Japanese quarters.

Game 2 was the Demolition game against Soviets.  We discussed this before starting and agreed that it is a hard scenario to win.  A unit must begin a turn adjacent to the opponent’s objective (we used the vehicles on the centre of the table edges).  This requires some very gutsy moving up the centre and taking a lot of lumps on the way down.  The other approach is the longer path down the side with a possible flank march. Any flank attack is going to need to wait until turn 4 to come in deep enough and would have to run for 2 turns to even touch an objective or rely on a vehicle.  My opponent came up the centre with his T34/85.  I had a BA10, Zis and inexperienced squad that might have taken it out.  I did get a pin (maybe 2) on it and the tank failed one order test, going back and buying me more time.

The white dice by the Zis is the opposition’s heavy mortar ranging in on me.  I took 1 more ranging in attempt (a miss) then shifted the gun.

Our boys did OK on the left flank but we worked out that the game would not run to turn 6 or 7.  In a last ditch to break through I ran the scouts at the opposition’s inexperienced squad but they were mown down by ambush fire.  We called the game on points, a draw but I had destroyed more units by about 10 points. 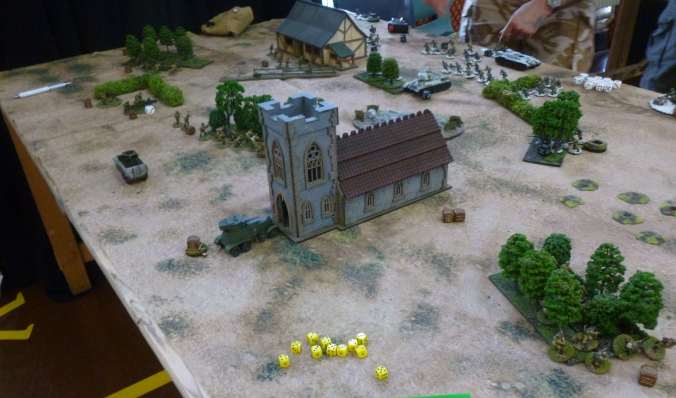 Things were looking up but it all went pear shaped on the last game.  This was the Manhunt mission and I had not thought the scenario out enough.  I picked the defender (1st lesson you need to be the attacker).  The defending units are set up in a 12″ diameter circle based on the centre of the table.  One of these units is the commander.  If he is captured through losing in hand to hand combat the game is lost.  It is won by keeping him alive or having him destroyed by shooting.  This scenario cannot generate a draw.  I lost on turn 2  and believe that another player had a similar lesson. 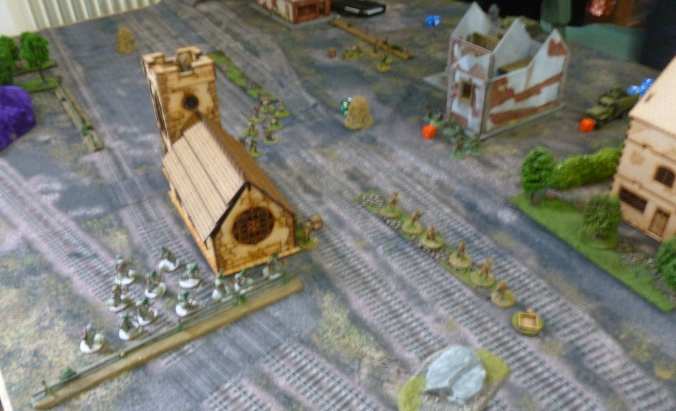 I played against Soviets again, unfortunately these pictures did not come out well.  I did not fully understand the reinforcement rules here and paid the price.  On turn 1 units can come on from their home board edge only.  On subsequent turns units can enter from any board edge that an opposition unit has not used that turn.  So if you drew the 1st 4 dice a unit could be brought on from each of the 4 edges keeping all opposing off board units out of the game that turn.  I initially placed my HQ 2′ and a bit from the opposing edge.  My opponent ran on units including 1 that entered a building.  The next turn he ran out of the building and assaulted my HQ.  Moving within a building between turns being free. We carried on the game for fun leading to several other situations where my HQ might have been assaulted.

Thinking back on the game I should have deployed my HQ about 32″ from the enemy edge and placed the scouts (who with ‘forward deploy’  do not need to deploy in the central circle) behind my HQ towards my own edge.  If the enemy came on from my edge on turn 2 they would need to assault through the scouts.  If they came from their own edge on turn 1 they could not get to my HQ on turn 2.  Both side edges would also be out of reach.  This should guarantee survival to turn 3 from when things will firm up a bit as there will be less troops left to come on.

Manhunt is a mission best played if rolled randomly as with prior knowledge there are several list choices that could help out.  Maxing out the HQ size to boss and 2 friends might help a little.  Having more units will mean more dice and a better chance of an early dice draw and closing off a board edge even if some of those units are of minimal combat use.  A defender could bring on a transport, load up the HQ then run back and forth.  Running vehicles cannot be assaulted and if the vehicle is shot at the HQ might be destroyed, winning the game.  The only defence would be to hope to pick a dice and assault before the vehicle gets to run.

This is the first scenario in the Sea Lion campaign book.  It is a patrol scenario designed for forces of around 500 points preferably made up of small size squads.  The forces here are approximately 500 points and just about equal but not exact for a number of reasons.  The book had just arrived and I had it to hand not the German or British army books.  I failed to find the minefield points as these are buried in the text not together with the minefield summary charts.  I also missed putting on a 2nd British HQ, paid for German SMGs that I did not use and used a British carrier that as armour should not have been in the scenario.

The British are all Home Guard and inexperienced apart from the carrier and the single unit holding the crucial communications hub (telephone box).  The infantry are in units of 8 or 10 giving some chance of inexperienced troops staying around but resulting in only 5 combat, 1 command and 1 vehicle dice.

The Germans are veterans, 3 combat units of 5 or 6 men, 2 demolition squads of 2 men, a single Abwehr agent and the commander.  7 combat units but the boats had to be paid for adding another 4 dice for a total of 11.  This worked out rather well as the few large Home Guard squads stayed in the game but being unable to split attacks had limited firepower.  The more numerous Germans were more manoevrable but suscepatble to losses and multiple pins.  There was not quite enough boat space so the Abwehr agent met up with the boats on the beach.  Boats moved onto the beach with their activation, a further dice would move the Germans out of each boats.  The British did take a punt at one boat as it came ashore and before it debouched its passengers but this fire had no effect.  The demolition squad members had a satchel charge each as did the Abwehr agent.  Any of these could blow up the communications centre if they began their activations adjacent to the sandbagged area and rolled a 5+.

The British start with 2 infantry units and the command on the table.  Only 1 unit can be within 6″ of the objective so this is where the best troops are.  The British do not know where the Germans will land but do have 2 minefields, discretely marked with pine trees, on the board.  The brown raised areas are sand dunes, blocking soft cover.  The British get no forward observer.  Their special rule is rapid fire, useless for inexperienced troops.  They also gain +1 on morale tests taken when a unit is in cover.  I misread this rule and instead gave the British an extra +1 on being shot at while in cover.

Germans are ashore.  The pin dials mark where the boats would be if I had brought boat models.

Turns 2 and 3 are uneventful.  The Germans move up, a few shots are fired handing out some pins all round.  None of the Britsh reinforcements make it onto the table.

This is turn 4.  The on-table dice are order dice as I only brought 1 set of Bolt Action order dice.  Dice in wheels indicate pins, shown by the wheel not the die face.  2 British units have come on table including the carrier which the Germans could only destroy by assualting or wasting a satchel charge.  They could however pin it with firepower.

Turn 5 and the Germans close in, taking losses and pins but most of the satchel charge models are still in the game.

End of turn 5.  The Germans had got 3 bombers adjacent to the objective whose garrison are pinned.  The Germans got the 1st 2 dice of turn 6 and pulled the satchel pins but neither device did any significant damage.  With no hope of a win the Germans pull back.

More Germans are cut down on the retreat back to the boats.  As some consolation the British commander is cut down in one of the last shots of the game.

The game took 1 1/2 hours.  My opponent took the Germans and although primarily a 40K man ran through the actions quickly enough.  There was less for the British to do.  Being inexperienced, ‘take activation test’,  ‘fail’ was a common action.  Several mistakes were made with the scenario rules and the points costing but the core game idea was robust enough to stand up to it.