Fancying running out something different I brought a ‘Dad’s Army’ force to the Bolt Action tournament at Penine Raiders in Halifax in May 2019.  The event required 3 forces, 500, 750 and 1,000 points all from the same army theatre but not true escalation.  Full escalation requires the 750 point list to be a subset of the 1,000 and the 500 a subset of the 750.  That makes for much more interesting list choices as a unit that might be ideal at 750 can be massively under-powered at 1,000.

The 500 point game was pegged at 1 hour and was in night fighting conditions.  Points were gained for destroyed units and prisoners.  When a unit lost a melee the surviving models from the loser were kept as prisoners who could in turn be freed by another melee or the shooting down of their guards.  This works for most forces but the fanatic players found that models were wiped out in the successive rounds of melee leaving very few left over to count as prisoners.

I faced up against Japanese with some un-charactaristically small squads.  The hill here had no effect as terrain.  Both sides have advanced on from their table edges.

My Home Guard militia unit get a shot off when they would have been better off running away.

The Japanese opposite banzai forwards, stripping their pin and take our lads to the cleaners.   In the centre of the picture our lads take a building but the wily Japs shoot them up at point blank range.

The Home Guard have 1 unit of veteran commandos.  They are on the look out for some Japanese to capture but the whole army is out maneuvered.  Some clever Japanese movement has given them local superiority on the other side of the table.

The Japanese shoot up our guys in the house with 1 unit then charge in and finish them off with another.   The only consolation is that the commandos catch up with the Japanese and free some prisoners from earlier. 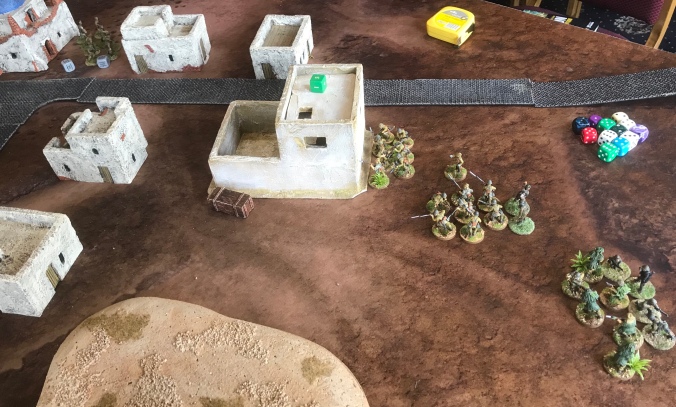 Game 2 at 750 points looks like the jungle but sees our lads up against late war Germans in the demolition scenario.  The German tactic is to bull up the middle with a big tank and roll onto the objective.  This would have been my plan had I not gone with a ‘winning is overrated list’.  If both players had followed that list strategy a game would probably involve some dancing around of tanks with a win if 1 could knock the other out quickly enough.  Anticipating this plan my 25 pounder is sited well back to cover the objective.  The Home Guard militia are also close by with sticky bombs having some chance to charge and knockout the tank.  Giving the tank assault bonus to the commandos would be better as they have a higher moral but that goes against the spirit of this list.

The 25 pounder takes a 1/6 chance shot at indirect fire on the tank and misses.  If it gets 1st dice in the next turn it would try again with a 1/3 chance of a hit (it did not).  On the left flank our boys move towards the German objective.  It would not take a strategic genius to work out that I have an off-board flank attack penciled in over there.  The Germans are all over their own objective like a rash

Here they come, tank supported by a motor cycle combo.  Our off-board artillery strike gives the Germans in the back line a good mashing but not enough to destroy any units.  Centre board, a German jeep and its crew are sent off for an early bath.

Our flanking force comes on.  The German unit nearing them is racking up the pins but not enough to cause a (flight) morale check.

The key moment.  The 25 pounder shoots and needing a 4+ to hit then 4+ to kill misses completely.  A net 1/4 chance for a draw and probable win on points (that tank is a big point sink).  The other part of the anti-tank plan had been to assault the tank with the militia.  They had been drawn away by assaulting the motorcycle combo.  Their alternative being to go down or get hosed down under a hail of virtual lead.  The Home Guard commander could have contested and bought another turn (together with a possible 25 pounder shot) but the Panzer got him on the way in.

So after a chain of failures our boys find ourselves built up to 1,000 points against contemporary Belgians.   A lot of the Belgian army is veteran and they have some nifty tanks and carriers.  They run the French national rule of a free gun.   Both sides start with 750 points coming on turn 1 with an additional 250 points as an outflanking force rolling from turn 3.

In the first turns both sides move up to the cover close to the table centre.  Our 25 pounder ranges in on the Belgian gun opposite but despite numerous hits rolls a succession of 1s and takes a long time to wipe out the last crewman.  Our tank arrives from the flank but does minimal damage.  The Belgians come on at the opposite flank and our boys take hits.

The Belgian tank, despite its small size and being behind a building in this shot has armour 8, making it a mini Matilda 2.  It trades shots with our cardboard armoured A9.

The A9 is hit but only takes pins (hooray) then fails its morale and backs off (boo).  Its supporting infantry take out their Belgian opposite numbers (a veteran vs veteran face off decided by point blank SMG fire).  The pesky left flank gun is also taken out.  The Belgians, however, have done a better job of concentrating on the right flank and we lose a squad.  Game credit must, however be given to the Belgian sniper who took out his British equivalent and the HQ unit.  The clear tipping point to giving a Belgian victory other losses being relatively close.  Note Jones’ van hid behind a building brought as a possible transport for the commandos but mainly because it looks the part.

Net result our lads came bottom.  With a little luck they might have squeezed 7th (out of 8) as the kill point count of the next player up was not much greater.  I had hoped to not come last but win the ‘best theme’ army.  There turned out not to be a prize for that but there was a consolation prize for coming last.  Despite the obvious gaming problems the army held up reasonably well.  The forward observer was not allowed in the 500 point game (no free units for anyone) but came in with good effect in the other battles.  The veteran commandos did well, the inexperienced militia less well, picking up a shed load of pins from their green test in game 2.  We ran with a Vickers MkVI in game 2 and an A9 in game 3.  Both are armour 7 and both avoided destruction although that meant that they needed to be used cautiously.

On an organisational front the tourney started and ended on time and there were no major hissy fits over the rules.  I learnt some new game pointers and noted some rules that one opponent had steadfastly got wrong but these would not have swung the game and at the bottom line it is all just playing with toy soldiers.

One thought on “Bolt Action Home Guard In Halifax”