Regulares are the Moorish regular troops that were employed by the Nationalists in the Spanish Civil War.  North Star, Empress and Templar produce suitable figures in 28mm.  For the command and support elements European troops would be used.

North Star sell their Regulares in sets of 10 or 30 mixed figures. The quality is not up to Empresss standards but they are not too shabby and a good deal cheaper. Of the set of 30 3 came with LMGs. The weapon model is unclear but it seems to be a Hotchkiss 1922.  A browse of this Spanish site shows the possibilities available:  http://www.sbhac.net/Republica/Fuerzas/Armas/Infanteria/Subfusiles/Subfusiles.htm#Ligeras

The modelling is not dissimilar to a rifle model and it is not much work to carve off the front of the LMG and glue on the front of a rifle. An advantage is that on the table the LMGs can be used as rifles. The flip side is that if used as LMGs one needs to look pretty close to pick them out. The Hotchkiss can be magazine or belt fed so an ammo belt around the shoulders might do the trick.

Empress sell a model with a LMG but in the same pack as their tank hunter team.  For Chain of Command a Regulares force needs 0-2 LMGs. In short, the North Star packing has too many LMGs and Empress will require 2 separate packs of 4 to supply the 2 LMGs.

About half of the North Star Regulares come with fez and half with turban which makes separating the game squads easy.  It is not clear if the turban should be wrapped around a fez.  Looking at the Regulares on campaign uniform guidelines are loose. 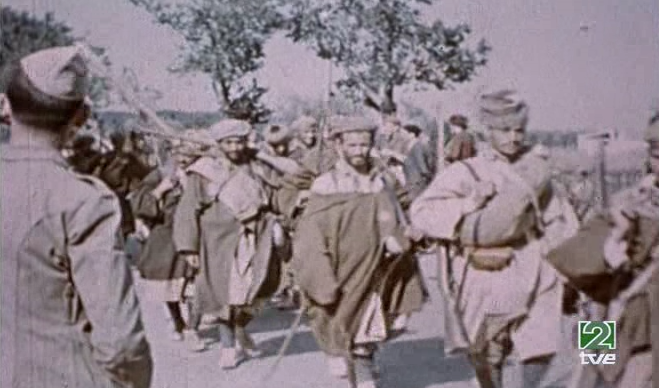 These stills from ‘Defenders of the Faith’ show the variation in Regulares campaign clothing.  One of the figures in the still above does seem to be wearing a turban wrapped around his fez.  The film is an original colour print not colourised although some colour fading is evident.

The Regulares are up against a Brigadista force.  This has spent 5 points of support on a T26 (3 points) and 2 LMGs (1 each).  There should be another 4 soldiers and a Junior Leader for the mortar squad.  No mortar as that is a separate support option but the troops were left in the box giving the Regulares a slight game advantage.

The game is scenario 6 from the main rul ebook which has the attacker moving up along the length of the table to take a fixed objective close to the defender’s edge.

This is the set up from the Republican side after the patrol phase .  There are 3 Republican jump off points each shown by a civilian vehicle and a 4th by the structure in the square.  Doubtless this is the base of a religious monument that the Godless Rojos have torn down.  We can assume that the village continues off-table behind the Republican lines but if the Nationalists get as far as the cross base they will dominate the area and force the Republic to withdraw.  A hedge has been knocked off kilter at the bottom of the image but it will magically move back later.

The Nationalist has 3 lorries to represent jump off points, all tight along the river’s edge.

There seems little point in holding back on the attack so the Regulares get their sections down as soon as possible.  These big Spanish units can take some losses but also get in each other’s way restricting their potential firepower.  The pre-game barrage should have helped the Nationalists as all Republican units coming onto the board would have to roll to come on.  The 1st 2 Republican units passed their rolls then 3 6s came up on the initiative dice ending the turn and the effect of the barrage.

A large chunk of the game saw little movement and a smattering of ineffective shooting.  Most units were gone to ground in soft cover making them act as in hard cover.  So being regular a 4-6 is needed to hit followed by a 6 to kill or a 5 to shock but with everyone being aggressive the 1st point of shock is ignored.  The key interaction was between the Pz I, Pak 36 and T26.  If the Pak 36 was taken out then nothing on the Nationalist side could touch the T26.  On the other hand only the T26 could affect the PzI (the Brigadists LMGs do have a very slight chance). The tanks shuffled from side to side of the table as best they could.  The Pak was well positioned to cover the centre ground.  The Nationalist dedicated a Senior Leader to maximise the chance of activating the gun and of removing any shock on it.  A good number of shots were exchanged, some hit and fewer still had any effect.  The Pz I picked up 2 shock but managed to speed off and later recover the shock.  The Pak finally got 2 consecutive hits on the T26, wounding its commander and inflicting enough shock for the crew to bug out.

With the T26 danger gone the Regulares gave up on exchanging pot shots and slid past the Government positions to head for the Republic jump off points to the rear.  So far the Brigadistas had kept these safe by using command points to move them back.  For a while the Regulares are exposed as they creep past the Brigadista positions but it will soon be a case of the Government troops having to assault them or lose the game.  Although the forces are about equal in numbers the Regulares are better at moving in cover and are better commanded.  The Government do not have enough boots on the ground to defend in depth.

The Regulares gain the main objective and spend a command point to end the turn and capture it.

The Regulares shuffle forward to hold the cross objective and take the nearby Republican jump off with the same section. The Republicans shuffle troops to try to hold them off. Their only hope is to take back the cross base. A turn end removes the green lorry jump off further lowering Republican morale. Several rounds of firefight ensue but the Republic takes the worst and eventually the Regulares risk going in.

The Regulares have 2 sections close enough to charge in but can only activate 1 at a time. The Brigadistas are badly beaten. 1 man is left in each of the 2 surviving squads, the junior leader is only lightly wounded. Also knee deep in shock the squads break. Brigadistas don’t break but it seems logical that their enforced retirement would have the same effect as breaking. To egg the custard the Regulares play a chain of command point to end the turn and remove the blue lorry jump off point that they now control. With Brigadista morale at 0 the Regulares gain the day. As a bonus the T26 was abandoned not destroyed so will be fighting for Franco in the future.